During the Covid pandemic the group has moved online to Zoom and we now meet more frequently, joining up fortnightly on Monday afternoons rather than monthly as previously. We continue to explore aspects of the nineteenth century but rather than making one detailed presentation at a meeting, several members now give mini, ten minute, talks to stimulate discussion.

We can currently accommodate a couple of additional members for anyone wishing to join us.

History Group 3 coordinator is John Entwistle, who can be contacted by e-mail or by telephone on 07890 068565.

In our history group we have been looking at “movers and shakers” and Edward Jenner falls into this category. He is called “the father of immunology” and is said to have saved more lives than the work of any other human.

Smallpox at the end of the 18th century killed approximately 10% of the population —20% in towns and cities. 3 out of 10 people who caught it died and those who survived were often left with severe scarring. 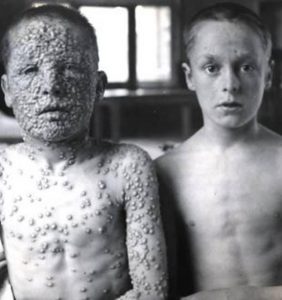 A friend of Jenner’s , physician John Fewster, observed in 1768 that prior infection with the relatively harmless, but similar, cowpox rendered a person immune to smallpox. Indeed a local farmer, Benjamin Jesty, successfully infected his family with cowpox during a local smallpox epidemic , presumably inducing immunity.

Jenner collected this information and also observed that milkmaids were generally immune to smallpox . So Jenner’s famous experiment was as follows. In 1796 , he scraped pus from the blisters of a milkmaid named Sarah Nelmes who had caught cowpox from a cow called Blossom. (Interestingly Blossoms hide now hangs on the wall of St Georges medical school library) He then injected the pus into James Phipps , the 8 yr old son of his gardener. James developed cowpox and was mildly ill . He then collected pus from a case of smallpox and injected it into Phipps (I hope his medical insurance was up to date) Phipps was unaffected and immunity proved. Jenners inoculation with cowpox extract became widespread both in Great Britain and worldwide . The last case of smallpox worldwide was in 1977 and the WHO declared smallpox eradicated in 1980. Thanks to Jenner —with a little help from Blossom, Sarah Nelmes and James Phipps.